Tobacco Industry Influence Where we Shop

The tobacco industry spends over a half million dollars a day in New York State to market its products – and 90 percent of it is devoted to in-store advertising with bright colors, rows of products and special discounts. And the more kids see tobacco, the more likely they are to start smoking. In fact, the average age of a new smoker is just 13 years old.

/ The Issue / Tobacco Industry Influence Where we Shop

By exposing the tobacco industry’s current marketing strategies, we can stop them in their tracks.

“From the 1950s to the present, different defendants, at different times and using different methods, have intentionally marketed to young people under the age of twenty-one in order to recruit ‘replacement smokers’ to ensure the economic future of the tobacco industry.”

Making products sweet, cheap and easy to get

To successfully recruit new young smokers and keep as many current smokers as possible, tobacco companies need to keep their deadly products affordable, accessible and attractive.  Understanding how they do that means taking a closer look at how they manipulate what is known as the Four P’s of marketing: Product Price, the Product itself, Promotion strategies and Place of sale.

In New York State, stores are required to register with the state if they want to sell tobacco products, including e-cigarettes, and are subject to regular inspections to ensure that they are complying with New York State laws regarding the sale of those products. These inspections are usually carried out by county departments of health. Violations of state law can result in the imposition of fines and/or stores can have their licenses suspended or revoked.

Steps New York State has taken:
Prohibiting the sale of tobacco products, including e-cigarettes, in pharmacies and in stores that contain a pharmacy.

The number of licensed tobacco retailers can vary dramatically from one community to another. The more tobacco retailers there are, the more exposure residents have to tobacco marketing. The more exposure to tobacco marketing, the more likely youth will start smoking, adult smokers will experience more cravings and impulse buying, and people trying to quit will be less successful.

The density of tobacco retailers

The number of tobacco retailers per capita is typically higher in low-income neighborhoods than in higher-income neighborhoods. This helps to explain the disproportionately high rate of smoking among New Yorkers with the least education and income who are 43% more likely to smoke than those with higher income and education.

While the tobacco use rate has steadily declined overall in the past decade, tobacco use is not an equal opportunity killer. Many factors contribute to the higher rates of smoking among those with the least education and income, and exposure to tobacco marketing is one of them.

Solutions
This infographic from ChangeLab Solutions and CounterTobacco illustrates various ways in which policy solutions can reduce tobacco retailer density.

According to the Surgeon General, raising the price of tobacco products is one of the most effective strategies for preventing young people from starting, reducing the amount of tobacco used, and increasing the number of people who quit. Steps New York State has taken include having the highest state cigarette tax in the nation, sales tax on e-cigarette products (one of 23 states), and prohibiting retailers from accepting discounts and coupons for tobacco products.

The Food and Drug Administration requires cigarettes to be sold in pack sizes of no less than 20 which keeps the price per pack reasonably high. Other tobacco products (also known as OTPs) are not included in this regulation, leaving products such as cigars, cigarillos, smokeless tobacco, and loose tobacco to be sold at cheaper and more tempting prices such as the products pictured to the left: Swisher Sweets priced at 2 for 99¢ and the Show Cigarillos at 5 for $1. 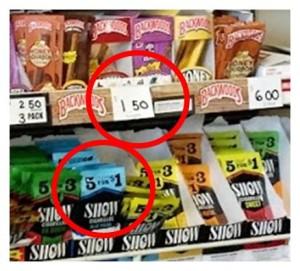 The results are predictable; OTP use among high school students in 2018 is nearly twice as high as cigarette use as illustrated in the graph below.

Solutions
Fortunately, there are additional steps states and local communities can take to prevent tobacco companies from undoing all the positive benefits of cigarette excise taxes, including: Implementing or strengthening minimum price laws, increasing tobacco retail licensing fees, and requiring a minimum package size for all tobacco products.

One of the primary ways that the tobacco and vape industries have attracted new youth users is by selling sweet, fruity and candy-flavored products. Flavors improve the taste and reduce the harshness of tobacco products, making them more appealing and easier for young people to use.  Flavors also create the impression that these products are less harmful than they really are.

The rates of NYS high school student use of various tobacco products over time illustrates the power of flavors in attracting youth. Youth cigarette use decreased dramatically after 2009 when flavored cigarettes, excepting menthol, were no longer allowed for sale.  During the same period and for the first time, youth use of cigars, cigarillos and chew in flavors like chocolate, wild berry, watermelon, lemonade, and cherry dynamite, exceeded the rate of youth cigarette use and is currently nearly twice the rate. After thousands of differently flavored e-cigarettes entered the market in 2013, youth use of e-cigs increased by 160% in NYS between 2014-2018, skyrocketing to an alarming 30.5% of high school students using e-cigs in 2018.

Steps New York State has taken include prohibiting the sale of flavored e-cigs (including menthol) as of May 18, 2020.

Issues that remain:
Menthol cigarettes and other flavored tobacco products

African American adults and youth are more likely to smoke cigars, cigarillos, little cigars, and menthol cigarettes than youth and adults in other racial/ethnic groups. Unsurprisingly, these products have a long history of being disproportionately marketed to African Americans. The documentary, Black Lives, Black Lungs, explores the history, marketing tactics, and impact of the tobacco industry targeting African Americans with menthol products.

The continued availability and aggressive marketing of menthol cigarettes lead to increased smoking initiation among youth and young adults, greater addiction, and decreased success in quitting smoking. The increased risks associated with mentholated tobacco use led the NAACP to recently recommend that the FDA ban menthol in cigarettes.

Solutions
Restrict the sale of flavored tobacco products, including menthol.

In 1998, significant restrictions were placed on the ways in which tobacco companies could market their products, including bans on billboard advertising, the use of cartoon characters, and limits on the distribution of branded clothing and other merchandise.

To the left is a typical tobacco product display. If you don’t use tobacco, you may not even notice, but kids do. Kids see. Kids notice. Kids remember. In fact, kids are more than twice as likely as adults to notice and remember retail tobacco marketing.

Tobacco companies require stores to enter into contracts that dictate how products are displayed. If store owners don’t abide by the contract, the tobacco companies may withdraw their product from the stores.

You may not have seen all the tobacco marketing in stores, but your kids have. It’s right there by the register, where they check out. Tobacco product displays, on average, take up 34 square feet of space in the most visible location in stores–directly behind the checkout counter.

On the heels of these restrictions, stores that sell tobacco became the primary focus of tobacco industry marketing. Marketing strategies at the point of sale include:

Tobacco industry contracts with retail stores also dictate the type and location of signs advertising tobacco products both inside and outside the stores. In NYS, retail stores average 21 interior tobacco ads. Exterior ads, (which can be up to 14 square feet or about 5.5′ x 2.5′), are often placed on light poles and gas pumps.

Tobacco marketing at retail stores is effective in capturing the attention of young people and making them more likely to smoke. Consider:

Each year in NYS, 4,900 youth become new daily smokers and 280,000 NYS youth currently under 18will ultimately die prematurely from smoking. 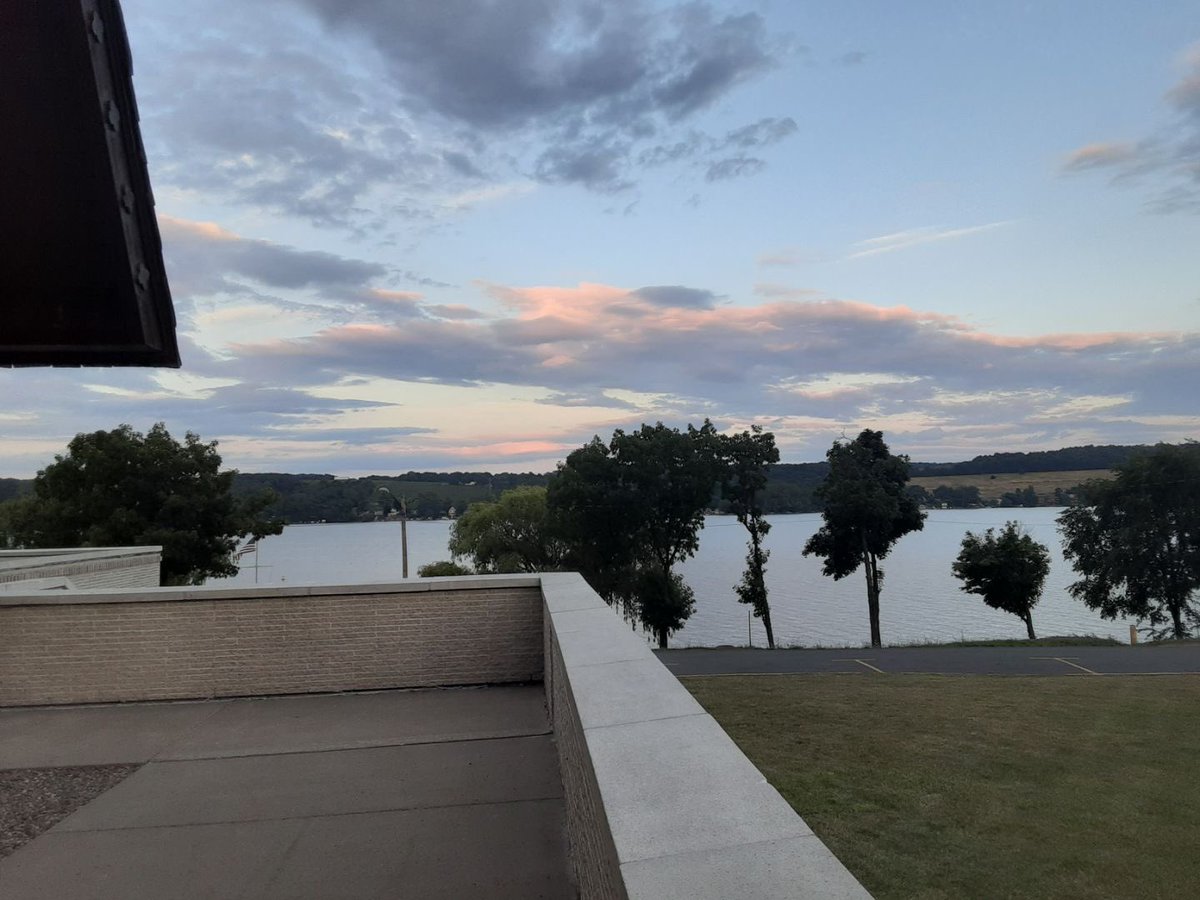 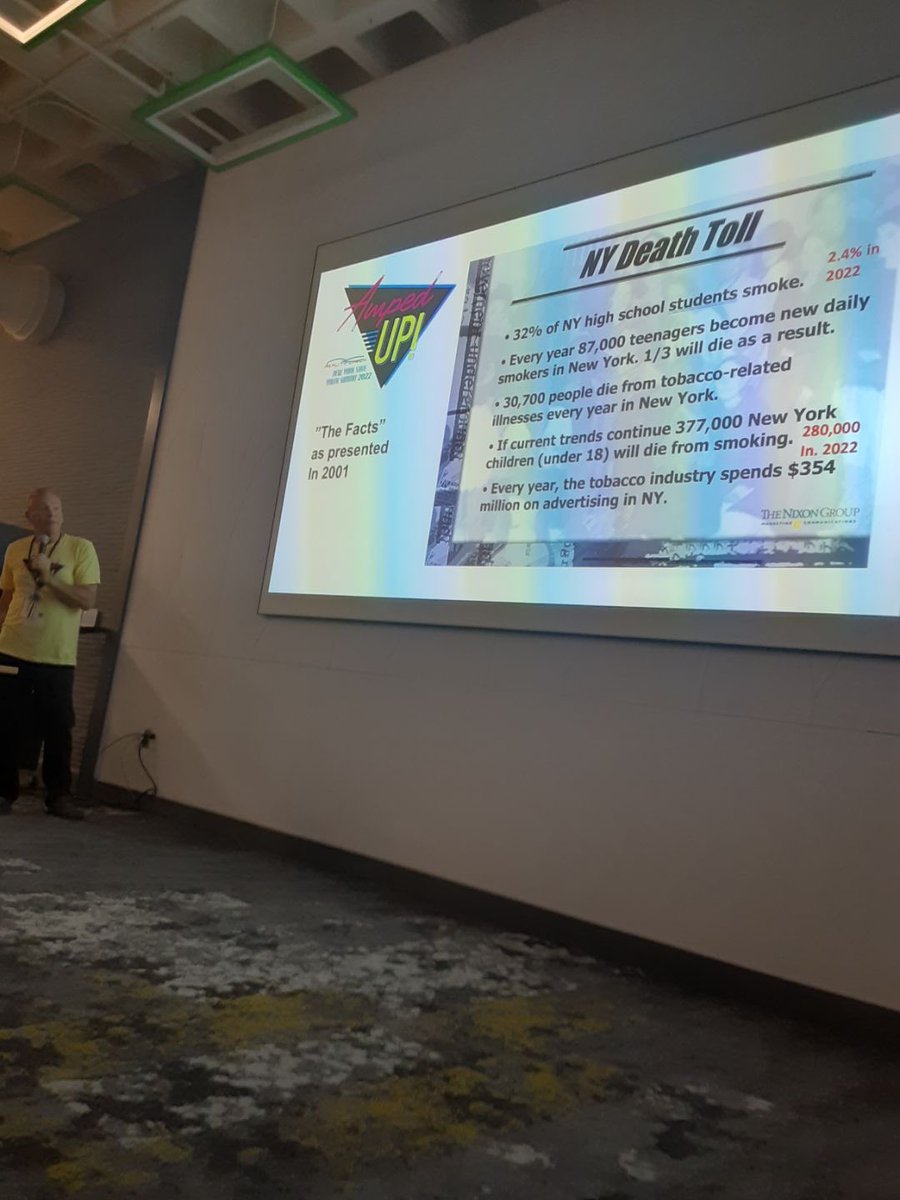 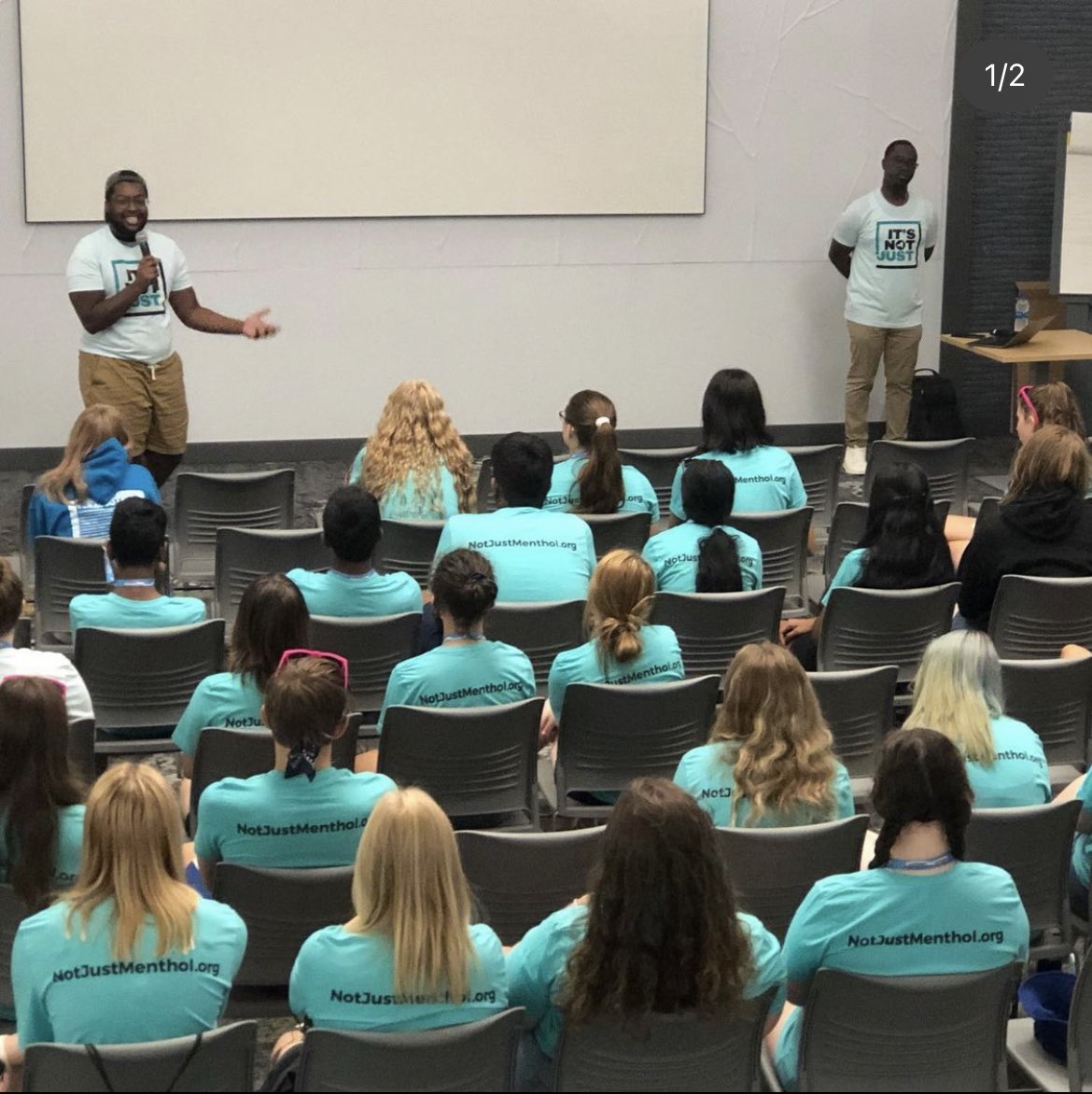